The CD “The Piano Solos: A Tribute to P.E.O. Founders” is now available on this website 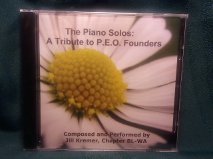 A collection of piano solos with a variety of styles including :Classical,
Contemporary, a March and the Roaring 20s. There are also some very
peaceful quieter composition. Some uses for these songs are: giving Founder’s Day Program,
being played at initiations and many of these songs have been played at State Conventions!

It was also played at Sesquicentennial International Convention in 2019

Cost of the CD is $15 plus $3.50 for shipping and handling. Please contact Jill with orders or

This wave sounds nothing short of rage as the musical phrases aggressively rivet
up to the apex, where the temper tantrum begins, then plummeting to serious
madness!

On January 9, 2016 I applied for my first grant in hopes of financing two upcoming piano solo Cds.
The following is the Artist Statement which I submitted.
Finger crossed!

I am pleased to submit this application for a $7,500 grant from the Artist Trust. If I were awarded the requested funding, I would use it for the following projects:

I. Beloved Literary Characters
To compose a suite of piano solos that reflect classic literary characters and to produce both recorded (CD) and written (sheet music) versions of the composition(s).

Four of the pieces to be composed will exemplify the characters from Louisa May Alcott’s beloved novel, Little Women. Each piece will reflect the personality of its character. Meg’s solo will be in the classical style; Jo’s will be an exciting march; Beth’s will be a sweet, melodious song; and Amy’s will be a fiery, high-spirited dance.

An additional three compositions will reflect characters and events from The Yearling by Marjorie Rawlings. The Storm will be represented by a spectacular technical whirlwind of a solo; Fodder Wing, the frail neighbor boy, will have a tender and poignant tune; Ol’ Slew Foot, the dangerous lurking bear, will have a song that sounds menacing and scary.

Two pieces will feature heroines from Henry Wadsworth Longfellow’s epic poems. The music that reflects “Evangeline,” the tragic story of a young woman who searches in vain for her lost love, will be lyrical and romantic. The music that reflects Laughing Water (Minnehaha), the bride in “The Song of Hiawatha,” will be playful and sound like cascading water.

The last composition will be named for Helen Hunt Jackson’s “Ramona,” a tragic love story about a Scots-Native American orphan girl who lived in Spanish California in the late 1800’s.

II. Women of France
The second project I would undertake with the Artist Trust grant is to compose a suite of piano solos entitled “Women of France.” As in the previous project, the individual pieces within this suite will be created to reflect the personalities of the women for which they are named. An as in the previous project, I will produce both recorded (CD) and written (sheet music) versions of the compositions.

The first piece planned is a longer one in four movements entitled “Voices: A Tribute to Joan of Arc.” This work will begin with phrases that sound like galloping horses, representing Joan’s life as a young warrior. The next section will be somber, reflecting divine intervention, followed by the sad music of the trial and execution. After the heavenly ascent, the sounds of galloping horses will be heard again.

In addition, the CD and written music will include eight shorter piano works that represent women important in the history of France. The composition planned for Marie Antoinette is in the style of Mozart, delicate and elegant. I have planned a solo composed for Josephine Bonaparte, wife of Napoleon, which will be flowing and lyrical. Madame Bovary, although a fictional character, will be represented by a composition with a country style of carefree innocence that spirals down to sadness and despair. The work for Josephine Baker will include music representative of the Roaring 20’s. Marie Curie’s song, in Baroque style, will emulate her orderly, scientific mind. The song for George Sand will be the most romantic, as this famous novelist was well known for her affair with Frederic Chopin. The piece for Margaret of Valois will have a “queenly” feel to it. The final composition will be dedicated to “The Unknown Burlesque Dancer” and will be a spectacular Can-Can dance number with a grand finale.

The funds will be used to compose the piano solos, record the compositions, edit the sound recording, produce the CD, edit the written music for publishing, and publish and copyright the written/sheet music.

These projects, although more ambitious, are commensurate with the successful P.E.O. Founders project I undertook previously. (My P.E.O. chapter has sold nearly 300 copies of the CD as a fundraiser!) If I am awarded the requested funds, it would be a great privilege to debut the new piano solos at the Artist Trust Meet the Artist performances.

New album release “A Song for Every Rose”

Here are fresh new original piano solos for 2015 which portray different moods and styles.
The “Princess Di Roses” solo is a poignant, lush, haunting composition.
“Rose Buds” makes for a perfect lullaby and “Rose Petals” is a grand waltz which is
sure to set your toe a tapping.
These ten piano solos are also presently available on I tunes.
click here for link to the Rose CD on CDBaby 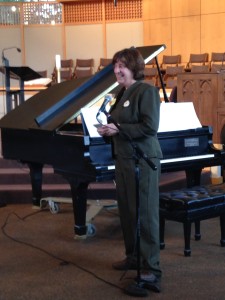 Some of the attendees commented that they were surprised at how different each piano
solo was from each other. For example: Franc Roads’ song is an aggressive march, but
Suela Penfields’ composition reflects the era of the Roaring 20’s.

Thankfully, I’m already booked in Ellensburg, WA for January 2015, but certainly looking for
other opportunities.

Composing with a first grade

On May 9th,2014 , its my great privilege to debut “Dear Grandparent, and Grand friends”  at Saint Matthew’s School.

The song covers an array of activities : from Grandma drinking tea, to spending birthdays and holidays with Grandparents and Grandfriends, to Grandpa napping all afternoon!  Well done first grade! 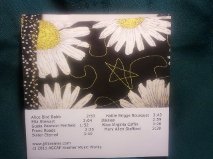 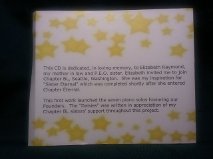 Here are the compositions on the CD…

Daisies This song was composed for Chapter BL in honor of all your support. Thank You!

Alice Virginia Coffin Queenly, Warm Hearted, Fun, Light
(composer note: This is the longest composition I had trouble getting this song to end)

P.E.O. Founder’s CD will be available to order at the State Convention

Below are some of the songs that will be heard at Convention this year.

(composer note: Listen for her grand entrance at the end)

Daisies  This song was composed for Chapter BL in honor of all your support. Thank You!

(composer note: This is the longest composition I had trouble getting this  song to end)