In a telephone interview, Jill Kremer, a member of P.E.O. Chapter

BL, Seattle, Washington, shared the following. The inspiration for what

was to eventually be named, “Sister Eternal”, was composed in honor of

her mother-in-law, Elizabeth Raymond, a P.E.O. that encouraged Jill to

and passed away. Elizabeth knew that Jill was writing her a musical composition

before she died. It is very reflective, often used for a memorial.

for each of the seven sisters and a piece called, Daisies, for her chapter

in honor of their support. It took one year for Jill to complete the music for

she began her work, interpreting each sister’s personality and putting it to

music. The CD begins with:

Alice Bird Babb who was a reader of classics, an intellectual and very

like Mozart, according to her research.  The listener is encouraged to listen for

Alice’s’ grand entrance at the end.

Hattie Briggs Bousquet, is identified as comforting, a leader, the first

to propose sisterhood, elegant, simplistic. Her music is slow, haunting

and romantic, according to Jill.

Ella Stewart, is a lively person and

Suela Pearson Penfield, is a musician and flapper of the group, so her

music revolves around the Roaring 20’s.

Jill had a difficult time ending this one.

Franc Roads and it is like her, strong, vigorous, a dramatic march

Mary Allen Stafford, is a motherly person, graceful and cheerful. Her music

is described as flowing, easy listening and soft.

Daisies, is whimsical, contemporary and fast.

and Ohio. We are the first chapter in North Carolina to order her music. Jill

is a performing pianist that has toured throughout the United States. I encouraged

her to consider a tour in North Carolina so we could enjoy her talent.

The Piano Solos: A Tribute to P.E.O. Founders

Composed and Performed by

“Piano Time” in Shoreline is back this summer with 5 new pianos! 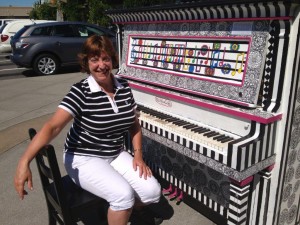 One of the new pianos this year!

P.E.O. Founder’s CD will be available to order at the State Convention

Below are some of the songs that will be heard at Convention this year.

(composer note: Listen for her grand entrance at the end)

Daisies  This song was composed for Chapter BL in honor of all your support. Thank You!

(composer note: This is the longest composition I had trouble getting this  song to end) 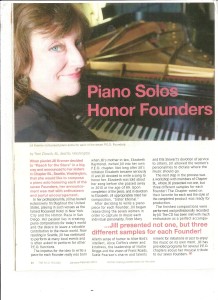 This article published in January 2013

I’m very honored to be responsible for the music at the P.E.O. State Convention this year at the Double Tree Hotel

on June 1st and 2nd! Please come by and say hello if you are attending. It will be a lot of fun this year!

I’m pleased to announce the launch of a new blog addition to my website. Check back for the latest news about where I’ll be playing, new music, etc.